“Let’s just face it… There’s a philosophical difference here, and there’s no point in dialogue. Some of us think that a presumption of joint custody is just not a wise thing to do, and that’s all there is to it.” Ben (all names are fictitious), one of those present on a conference call in November 2012, said something like this. He was representing a group of lawyers, and this was his way of letting me know that he wasn’t going to support the attempt to bring everyone together to seek a collaborative solution to the acrimonious debate about child custody legislation that was raging in Minnesota at the time. It’s a classic example of how many of us have been trained to think: since there isn’t a way to resolve differences of this nature, the only path is to duke it out, and whoever gets the most votes wins (our modern “sublimation” of fighting it out physically).

Until that moment, we were going back and forth and round and round in that conversation, with people being, at best, lukewarm about the prospect of sitting in a meeting for a day with other stakeholders. The tension, and the mistrust that gave rise to it, were high. Still, within minutes, we had the first breakthrough in what became a succession of extraordinary moments over the course of two legislative sessions.

What I am writing about today is what I did in that moment, and in countless other moments in that project and in everything that I do when I work with groups, organizations, and even individuals. I started out by asking the man what exactly made it unwise to have a presumption of joint custody. I asked, because I didn’t know, and it was too broad for me try guessing. His words in response were something like: “You can make too many mistakes this way, because you end up looking at all families in the same way.” That was enough information for me to take a guess next. “Let me see if I got it,” I said. “Is the gist of it that you want to ensure that each family is handled according to its specific circumstances?” That was, indeed, it.

Then I took a gutsy move, on the phone, without seeing anyone’s faces. “I bet anything that Jenny would wholeheartedly endorse this principle even though she is in disagreement with you,” I said, hoping and having faith that this would be the case. Jenny was representing the opposing view.

I stopped her before the fragile accomplishment would dematerialize. “Hang on, Jenny,” I said, and then addressed the whole group again, pointing out the unexpected agreement between warring parties, and explaining to them that this – the finding of agreements on principles in the midst of disagreements on positions – was what we would do on the day we came together. That would also be when we would hear from Jenny about her “but,” and look for another point of agreement under the disagreement. That was when everyone came to see the extraordinary potential of coming together, and no more objections were raised. The rest, in a most literal sense, is history I plan to come back to – here and elsewhere. 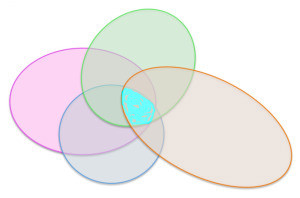 This agreement at the heart of disagreement is based on identifying what I call the “noncontroversial essence.” Fundamentally, I look for the core of what someone wants rather than what their concerns are. Focusing on what’s wanted moves the energy forward towards possibility and solution. This focus is not exactly on what we mean by “need” in Nonviolent Communication, although it’s close! I look for that core, deep enough that there will be no controversy, and only as deep as that. Deeper levels may have even more commonality, as all my years studying and teaching Nonviolent Communication have taught me. Still, I want to stop closer to the specific content, because the level of basic human needs – which always attains commonality – doesn’t provide enough constraints on a potential solution that works for all, which is my ultimate goal in this and all projects. In this case, the need in one word would have likely been “flexibility” or “adaptability” which are just too vague for any decision-making purpose. Once what’s wanted is framed at the optimal level, like “ensuring that each family is handled according to its specific circumstances,” with the result that all agree on it, it then becomes a principle for the collaboration.

I identify and check the noncontroversial essence when I facilitate groups, when I coach individuals, when I lead trainings, and, probably, in every conversation I have. I learned over time that it supports everyone in any process to aim for that level. For the person who spoke, especially if it’s a controversial position, it is comforting to be heard and to know that what’s truly important to them matters within a process. For me, as facilitator, it provides succinct clarity about what’s going on that helps me navigate to shore, to a collaborative outcome. For those who are in disagreement, it provides them a way of seeing their “opposition” in a different light.

Then, the entire group is invited to take ownership of the collective list of principles. At that point, only tweaks are needed. For the Minnesota group, by the end of one chaotic day in which people didn’t honor the commitment to be there for the whole time and, instead, came late or left early, we had a list of 25 principles everyone in the room agreed to. Two phone calls later, the constituencies represented in the room were consulted with, principles were tweaked to become more noncontroversial, and one more principle was added. The resulting list of 26 principles has been guiding the project from then to its biggest milestone ever, the almost unanimous passage of the legislation they co-created. It will continue to guide it to completion as the group faces the task of educating the public, the courts, the lawyers, and litigating parents about the breakthrough changes that came about through this remarkable collaboration.

Image credits: “Locked in combat no retreat” by Corwinhee – Own work. Licensed under CC BY-SA 4.0 via Wikimedia Commons.
“Listen” by Ky, Flickr, CC by 2.0
“Essence,” by Dave Belden, CC.

Subscribeto RSS Feed
W.A.I.T before you speak or hit “Send”